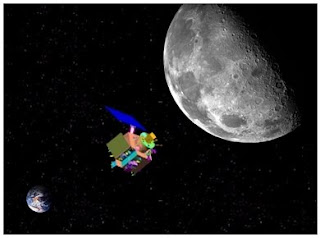 Spearheaded by Indian Space Research Organization (ISRO), India will launch Chandrayan I in 2008. According to ISRO, Chandrayan-1 is the first mission in "India's foray into a planetary exploration era in the coming decades." Chandrayan-1 will be the "forerunner of more ambitious planetary missions in the years to come, including landing robots on the Moon and visits by Indian spacecraft to other planets in the Solar System." The Indian Space Research Organisation (ISRO) calls the Moon flight project Chandrayan Pratham, which has been translated as First Journey to the Moon or Moonshot On 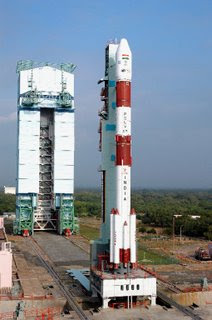 Chandrayan I, India's first unmanned mission to moon was announced on August 15, 2003. The 1,157-lb. Chandrayan-1 would be launched in the fourth quarter of 2008. The Chandrayan I mission envisages placing a 525 kg satellite in a polar orbit 100 km above the moon and it will be launched using a modified version of India's indigenous Polar Satellite Launch Vehicle (PSLV). At first, the spacecraft would circle Earth in a geosynchronous transfer orbit (GTO). From there, it would fly on out into a polar orbit of the Moon some 60 miles above the lunar surface. The mission is expected to have an operational life of about 2 years.

The project's main objectives are high-resolution photography of the lunar surface using remote-sensing instruments sensitive to visible light, near-infrared light, and low-energy and high-energy X-rays. This will be accomplished using several payloads such as X-ray and gamma-ray spectrometers selected for the mission. In addition a total of about 10 kg payload weight and 10 W power are earmarked for proposals, which are now solicited. It will send back data that scientists on Earth would use to produce a high-resolution digital map of the lunar surface.

Considering the interest shown by the international scientific community, a provision has also been made to accommodate instruments from other countries, on Chandrayan-1. ISRO signed an agreement with ESA for including European instruments on board Chandrayan-1. The European Space Agency (ESA) has agreed to support India's plan to send a probe to the Moon by providing three science instruments for Chandrayan-1. They will be identical to those already in orbit around the Moon on ESA's Smart 1 spacecraft, which is surveying chemical elements on the lunar surface. The lunar satellite would also house a U.S. radar instrument designed to locate water ice. These instruments are to complement the main Indian experiments.

* Carry out high resolution mapping of topographic features in 3D, distribution of various minerals and elemental chemical species including radioactive nuclides covering the entire lunar surface using a set of remote sensing payloads. The new set of data would help in unravelling mysteries about the origin and evolution of solar system in general and that of the moon in particular.

* Search for surface or sub-surface water-ice on the moon, specially at lunar pole

* Observation of X-ray spectrum greater than 10 keV and stereographic coverage of most of the moon's surface with 5 m resolution, to provide new insights in understanding the moon's origin and evolution
India has announced that it plans to explore the Moon and will send an unmanned probe there by 2008. 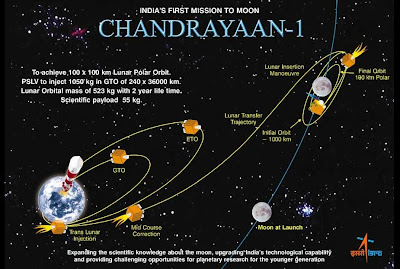 Why send a probe to the Moon? While the South Asian nation has the second largest population on Earth, it is not a rich country with millions of uneducated and even homeless residents. Like all other nations sending machines and people to space, India considers funding of its space program to be a matter of prestige. In making the announcement in 2003, Prime Minister Atal Behari Vajpayee said a Moon flight would showcase India's scientific capabilities.

A former science minster in the Indian government, physicist M.G.K. Menon told news media that Chandrayan-1 "will excite the younger generation." Menon also said the Moon flight would have the effect of "enormously increasing the confidence of the nation".

Whether India should embark on a manned mission or not is a subject of national debate since sending a man to the moon is a very costly affair. A manned mission would take seven to ten years to accomplish and would cost at least $2.2 billion. It was on July 20, 1969 that "Eagle", the lunar module landed on the moon and American Astronaut Neil Armstrong took "that one small step" paving way for "a giant leap for mankind". The last man landed on moon in the 70's. However, after such a "giant leap", the moon mission was mysteriously discontinued. It seems strange that man has not yet constructed a permanent manned base on the moon. A manned mission from India is yet to be decided. However, for the near future, there is the planned project of Chandrayan-2. More (Click Here)
Posted by MADHUMITA at 11:00 AM

Now that we are mapping the moon with high resolution pictures we would be able to put many skeptics remarks at rest if we could get glimpses of the LEM's of the many Apollo moon landing missions left behind on the surface.