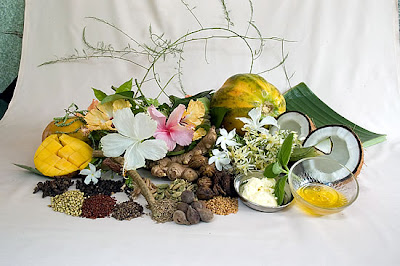 Ayurveda, an age-old system of India is widely used by millions in India, Nepal and Sri Lanka since ages and is also being increasingly used in the Western world as an alternative medicine system. Ayurveda or Ayurvedic medicine is the most ancient of the six recognized Indian Systems of Medicine of the Indian subcontinent. It has its origins in the oral advice on living from the Vedic metaphysics (Charaka Samhita). The importance of Ayurveda, the science of life, the origin of most forms of natural and alternative medicine, is mentioned in the Rig Veda, one of the oldest philosophical texts of the world. It is widely considered to be the oldest continously practiced system of medicine on the planet, dating back to the pre-vedic period of 5000 BC. The Atharva-veda discuss Ayurveda in more detail, and classical Ayurvedic texts of Charak Samhita and Sushruta Samhita were written around 1000 BC. The Sutrasthana of Charaka Samhita, a much referred ayurvedic text, says; "The three—body, mind and soul—are like a tripod, the world stand by their combination; in them everything abides."

The word "Ayurveda" is a tatpurusha compound of the word Ayus meaning "life," "life principle," or "longevity" and the word "veda", which refers to a system of "knowledge" or "wisdom." Thus "Ayurveda" roughly translates as the "wisdom for living" or "knowledge of a long life". The related term of Suddha (pure) medicine refers to classical Ayurvedic medicine. According to this perspective, Ayurveda is concerned with measures to protect "ayus", which includes healthy living along with therapeutic measures that relate to physical, mental, social and spiritual harmony. Ayurveda is also one among the few traditional systems of medicine to contain a sophisticated system of surgery (which is referred to as "salya-chikitsa" (chikitsa=examination)).

History
Where ayurvedic knowledge ultimately developed is unknown, but oral myths, circumstantial evidence, and several early texts have been used to research its origins. Indigenous Indian medicine is probably as old as the Indus Valley Civilization dating back to 3000 BCE. The meticulously planned cities of Harappa and Mohenjodaro are pointers not only to India’s rich cultural heritage but also to its advanced systems of hygiene and health care. The remains of deer antler and bitumen found in Harappa testify to the existence of a medical practice. It was between 1200 and 700 BCE, that the four sacred Vedas were composed. References to diseases, herbs and herbal cures can be seen in all the four Vedas especially in the Rig Veda. The Atharva Veda has many hymns eulogizing herbs. Many plants were worshipped as deities and invoked by incantations. There were also many Mantras (invocations) to combat jaundice, consumption and hereditary diseases among others. The Atharvan hymns chanted for the cure of diseases were known as Bhaishajyams and those for attaining longevity and prosperity were called Ayushyams. These hymns, especially the Ayushyams are considered to be the foundation for advances in later medicine.

In India, research in Ayurveda is largely undertaken by the statutory body of the Central Government, the Central Council for Research in Ayurveda and Siddha (CCRAS), through a national network of research institutes. However, there is a huge gap between the number of sources of ayurvedic medicines and their proper scientific analysis. As a traditional medicine, many ayurvedic products have not been tested in rigorous scientific studies and clinical trials. Most clinical trials of Ayurvedic approaches have been small, had problems with research designs, lacked appropriate control groups, or had other issues that affected how meaningful the results were.

Despite these misgivings, some ayurvedic products, mainly herbs used for phytotherapy, have been tested with promising results. Turmeric has been used in Ayurvedic medicine since 1900 BC, and its derivative curcumin appears to have beneficial properties. Tinspora cordifolia has been tested. Among the medhya rasayanas (intellect rejuvenation), two varieties of sage have been been tested; one improved word recall in young adults, and another improved symptoms in Alzheimer's patients. In some cases Ayurvedic medicine may provide clues to therapeutic compounds. For example, derivatives of snake venom have various therapeutic properties. Many plants used as rasayana (rejuvenation) medications are potent antioxidants. Neem also contains beneficial pharmacological propertie. A review of Ayurveda and cardiovascular disease concluded that while the herbal evidence is not yet convincing, the spices are appropriate, some herbs are promising, and yoga is also a promising complementary treatment.

Ashtanga are the eight branches of Ayurveda:

(note: Tantra as a Sanskrit term is broadly defined as a system characterized by threads of multiply diverse techniques, methods, and practices used in special ways in order to achieve mental, physical and spiritual change, or knowledge through complex action)

The central concept of Ayurvedic medicine is the theory that health exists when there is a balance between three fundamental bodily humours or doshas called Vata, Pitta and Kapha. Disease is said to occur whenever the balance between these doshas is disturbed.

* Pitta is the thermal, explosive force behind the ability to transform everything. Pitta is generally designated as fire. It represents all the hot properties. This force represents transformation. Though they are unable to change but have the capability to change or modify and control the very important activities taking place in the body. The main activity of pitta in the body is to perform metabolism. It controls body temperature, maintains skin coloration, intelligence and understanding is also under control of pitta. In the psychological aspect of the body, pitta signifies anger, hate and feeling of jealousy. The place or the seat of pitta in the body where it resides is mainly our upper abdomen, including the organs like stomach and small intestines. It also resides in sweat glands, eyes, blood and skin. It also is involved in absorption, assimilation and providing nutrition to the body.

* Kapha is the cohesion that holds everything together. Kapha is referred to as the lubricating element in our body. It is moist in nature. It circulates in whole body and then nourishes the organs. It helps in connecting the various organs of the body, which without it may not be able to be united. Kapha holds the cells and the tissues of the body and helps in maintaining the bodily resistance. It is responsible for providing strength and maintains the natural resistance among the tissues. Kapha is present in the chest region, throat, head, sinuses of head and face, nose, mouth, stomach, body joints and is present in the form of mucus.

All Ayurvedic physicians believe that these ancient ideas, based in the knowledge discovered by the Rishis and Munis, exist in harmony with physical reality. These Ayurvedic concepts allow physicians to examine the homeostasis of the whole system. People may be of a predominant dosha or constitution, but all doshas have the basic elements within them.
Posted by MADHUMITA at 12:36 AM