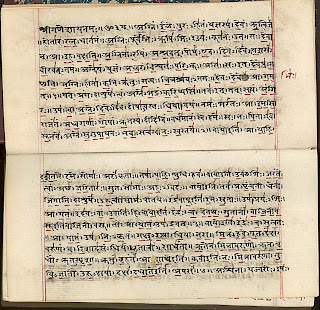 The Vedas are among the oldest sacred texts in the world dating from c. 1500-500BCE. They form the oldest layer of Sanskrit literature and the oldest sacred texts of Hinduism. They contain hymns, incantations, and rituals from ancient India. Along with the Book of the Dead, the Enuma Elish, the I Ching, and the Avesta, they are among the most ancient religious texts still in existence. Besides their spiritual value, they also give a unique view of everyday life in India four thousand years ago. The Vedas are also the most ancient extensive texts in an Indo-European language, and as such are invaluable in the study of comparative linguistics.

The four canonical Sanghitas or Vedas proper, of which the first three (trayi) are related to the performance of yajna (sacrifice) in historical (Iron Age) Vedic religion are:
1. the Rigveda, containing hymns to be recited by the hot? or reciting priest;
2. the Yajurveda, containing formulas to be recited by the adhvaryu or officiating priest;
3. the Samaveda, containing formulas to be sung by the udg?t? or chanting priest.
4. the Atharvaveda, is one of the oldest and is relatively great in extent from a collection of praises, stories, predictions, apotropaic charms and some speculative hymns used by the priests.

Most Indologists agree that an oral tradition existed long before a literary tradition. Scholars have determined that the Rig Veda, the oldest of the four Vedas, was composed about 1500 B.C., and codified about 600 B.C. It is unknown when it was finally committed to writing, but this probably was at some point after 300 B.C. Due to the ephemeral nature of the manuscript material (birch bark or palm leaves), surviving manuscripts rarely surpass an age of a few hundred years. The Benares Sanskrit University has a Rigveda manuscript of the mid-14th century, however, there are a number of older Veda manuscripts in Nepal belonging to the Vajasaneyi tradition that are dated from the 11th century onwards.
The Vedic period lasts for about a millennium, spanning the Late Bronze Age and the Iron Age. According to vedic researcher Gavin Flood and Michael Witzel, the Rigveda was compiled from as early as 1500 BCE over a period of several centuries. The Vedic period reaches its peak only after the composition of the mantra texts, with the establishment of the various shakhas all over Northern India which annotated the mantra samhitas with Brahmana discussions of their meaning, and reaches its end in the age of Buddha and Panini and the rise of the Mahajanapadas (archaeologically, Northern Black Polished Ware). Michael Witzel gives 150 BCE (Patanjali) as a terminus ante quem for all Vedic Sanskrit literature, and 1200 BCE (the early Iron Age) as terminus post quem for the Atharvaveda.

The four Vedas, the Rig Veda, Sama Veda, Yajur Veda and Atharva Veda are the primary texts of Hinduism. They also had a vast influence on Buddhism, Jainism, and Sikhism. Traditionally the text of the Vedas was coeval with the universe.
Posted by MADHUMITA at 11:16 AM