Bhitarkanika is a fascinating location of rich, lush green vibrant eco-system lying in the estuarine region of Brahmani- Baitarani in the North-Eastern corner of Kendrapara district of Orissa. The area is intersected by a network of creeks with Bay of Bengal on the East. The alley between the meandering creeks and rivers, houses the second largest viable mangrove eco-system of India.

Bhitarkanika is a hot-spot of biodiversity. During 2002 the Bhitarkanika mangroves having an area of 2672 sq-km. been declared as a Ramsar site being a wetland of international importance. It's home to India's largest population of giant salt water crocodile, the largest crocodile on earth. Also home to more than 215 species of avifauna including amazing eight variety of Kingfishers. It is the second largest viable Mangrove Eco-System in India. 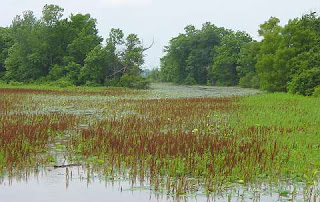 Gahirmatha beach, which forms the eastern boundary of Bhitarkanika Wildlife Sanctuary sup ports the largest known nesting beach of olive ridley sea turtle in the world. Nearly half a million olive ridleys nest every year at Gahirmatha. Its 672 sq.kms. of mangrove forest & wetland, provides home to well over 215 species of birds including winter migrants from central-Asia and Europe. Giant salt water crocodiles and variety of other Wildlife inhabitate in this eco-system which form Asia's one of the most spectacular Wildlife area.

An area of 145 Sq.kms. have been notified as Bhitarkanika National Park vide Notification No.19686/F & E dated 16.9.1998 of Forests & Environment Department, Govt. of Orissa. It has much significance with regard to ecological geomorphological and biological background which includes mangrove forests, rivers, creeks, estuaries, back water, accreted land and mud flats. Bhitarkanika National Park is the core area of Bhitarkanika Sanctuary.

Flora
Bhitarkanika is one of the largest contiguous patches of mangrove forest in the country, representing the Indo-Malayan mangrove community. So far 58 species of mangroves have been recorded in India of which 55 are found in Bhitarkanika. Mangorves forests are salt tolerant, complex and dynamic eco-system that occur in tropical and subtropical silt deposited inter-tidal regions. Bhitarkanika sustains more than 70 species of plants among Mangrove and its associates. Existence of three species of Rhizophora, Heritiera and Avicennia each and four species of Bruguiera are some of the interesting features of flora of Bhitarkanika. In Bhitarkanika a variety of wild rice grows abundantly in tidal mud flats. Based on the genetic strain of this wild rice, several saline and flood resistant varieties of rice have been developed.

Fauna
Bhitarkanika harbours one of the largest populations of endangered saltwater crocodile in India and is globally unique in that 10 percent of the adults exceed 6 m length. Nearly 700 saltwater crocodiles inhabit Bhitarkanika and its associated river systems. Nearly half a million olive ridley sea turtles on an average, nest every year along the Gahirmatha coast of Bhitarkanika. Besides water monitor, which is common, yellow and common monitors are also sympatric here. The mangrove forests and its adjoining wetlands support large number of resident as well as migratory waterfowl. Of the 174 species of birds, 82 breed here and 57 species winter in Bhitarkanika. The endangered lesser adjutant stork also breeds here. Bhitarkanika is also home for several mammals. Five species of marine dolphins have been recorded from the area. The common species encountered in this area is the Indo - pacific humpbacked dolphin. Notable among the other mammalian fauna of Bhitarkanika are striped hyaena, fishing cat, jungle cat, smooth - coated otter, civet, Indian porcupine, wild boar, spotted deer and sambar. One of the largest heronries in the country is located here. More than 20,000 birds consisting of 11 species nest in this heronry during June to November every year.

Air : The nearest airport is situated at Bhubaneswar.

Rail : The nearest railhead is situated at Cuttack and Bhadrakh.