SIKKIM'S INCLUSION AS AN INDIAN STATE 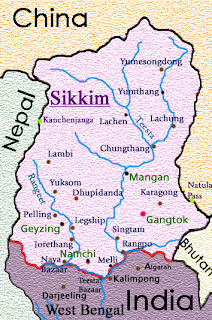 Sikkim was an independent nation till the year 1975. However, in the spring of 1975, unavoidable circumstances led to its inclusion to the Indian Union as its 22nd state.

In 1947, a popular vote rejected Sikkim's joining the Indian Union and Prime Minister Jawaharlal Nehru agreed to a special protectorate status for Sikkim. Sikkim came under the suzerainty of India, which controlled its external affairs, defence, diplomacy and communications, but Sikkim otherwise retained autonomy. A state council was established in 1955 to allow for constitutional government under the Chogyal.

Meanwhile trouble was brewing in the state after the Sikkim National Congress demanded fresh elections and greater representation for the Nepalese. In 1973, riots in front of the palace led to a formal request for protection from India. A historic agreement was made on 8th May, 1973, between the Chogyal, the leaders of the political parties representing the people of Sikkim and the Government of India supported by the unanimous desire of the members of the Sikkim Assembly. The Chogyal promulgated a Bill on the 4th July, 1974 as the Government of Sikkim Act, 1974. For the speedy development of Sikkim in the social, economic and political fields, section 30 of the Government of Sikkim Act, 1974 empowers the Government of Sikkim, inter alia, to seek participation and representation for the people of Sikkim in the political institutions of India. On the 28th June, 1974, after passing the Government of Sikkim Bill, the Sikkim Assembly resolved unanimously that measures should be taken, amongst other things, for seeking representation for the people of Sikkim in India's parliamentary system.
The Chogyal was proving to be extremely unpopular with the people. In 1975, the Kazi (Prime Minister) appealed to the Indian Parliament for a change in Sikkim's status so that it could become a state of India. In April, the Indian Army moved into Sikkim, seizing the city of Gangtok and disarming the Palace Guards. A referendum was held in which 97.5% of the people voted to join the Indian Union. A few weeks later, on May 16, 1975, Sikkim officially became the 22nd state of the Indian Union and the monarchy was abolished.

In 2000, in a major embarrassment for the government of the People's Republic of China, the seventeenth Karmapa Urgyen Trinley Dorje, who had been proclaimed a Lama by China, made a dramatic escape from Tibet to the Rumtek Monastery in Sikkim. Chinese officials were in a quandary on this issue, as any protests to India would mean an explicit endorsement of India's governance of Sikkim, which the Chinese still regarded as an independent state occupied by India. China eventually recognised Sikkim as an Indian state in 2003, on the condition that India accepted Tibet as a part of China. This mutual agreement led to a thaw in Sino-Indian relations. On July 6, 2006 the Himalayan pass of Nathula was opened to cross-border trade, further evidence of improving relations in the region.
Posted by MADHUMITA at 10:48 AM