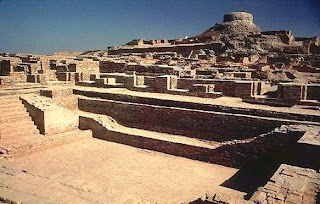 The earliest traces of civilization in the Indian subcontinent are to be found in places along, or close, to the Indus river. The greater Indus region was home to the largest of the four ancient urban civilizations of Egypt, Mesopotamia, South Asia and China. It was not discovered until the 1920's. Excavations first conducted in 1921-22, in the ancient cities of Harappa and Mohenjodaro, both now in Pakistan, pointed to a highly complex civilization that first developed some 4,500-5,000 years ago, and subsequent archaeological and historical research has now furnished us with a more detailed picture of the Indus Valley Civilization and its inhabitants. Most of its ruins, even its major cities, remain to be excavated. 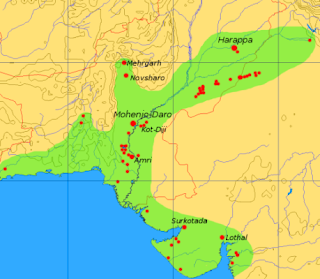 Many questions about the Indus people who created this highly complex culture remain unanswered, but other aspects of their society can be answered through various types of archaeological studies.

There seems to have been another large river which ran parallel and west of the Indus in the third and fourth millenium BCE. This was the ancient Saraswati-Ghaggar-Hakra River (which some scholars associate with the Saraswati River of the Rig Veda). Its lost banks are slowly being traced by researchers by various modern techniques of satellite imagery. Along its now dry bed, archaeologists are discovering a whole new set of ancient towns and cities.

Harappa was a city in the Indus civilization that flourished around 2600 to 1700 BCE in the western part of South Asia.
Mohenjo Daro, or "Mound of the Dead" is another famous ancient city of the Indus Valley Civilization that flourished between 2600 and 1900 BCE. It was one of the first ancient cities in the world. The site was discovered in the 1920s and lies in Pakistan's Sindh province. 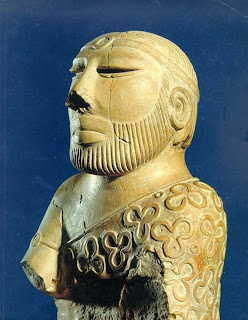 Only a handful of archaeologists have excavated here, described in the introduction and illustrated essay Mohenjodaro: An Ancient Indus Valley Metropolis. The excavation at Mohenjo-daro was led by Rakhal Das Banerjee, E. J. H. MacKay, and Sir John Marshall.

The Indus Valley people were most likely Dravidians, who may have been pushed down into south India when the Aryans, with their more advanced military technology, commenced their migrations to India around 2,000 BCE. Though the Indus Valley script remains undeciphered down to the present day, the numerous seals discovered during the excavations, as well as statuary and pottery, not to mention the ruins of numerous Indus Valley cities, have enabled scholars to construct a reasonably plausible account of the Indus Valley Civilization.
Posted by MADHUMITA at 9:49 PM