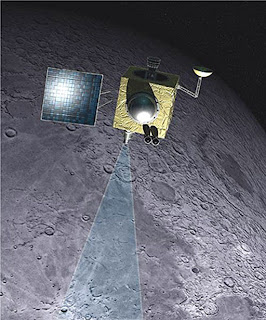 Chandrayaan reached the final resting orbit, about 100 kms from the moon on 12th November 2008. Chandrayaan will remain in this orbit for the next two years. During its remaining lifetime of 2 years, the terrain mapping camera will make a detailed study of the moon's surface to create a three dimentional map of the moon. It will also search for minerals and ice.

ISRO has carried out three orbit-lowering moves since the spacecraft entered the lunar orbit on 8th November. The spacecraft, which was launched on October 22, was propelled on its 4,00,000-km voyage to the moon in a number of stages, with its orbit being raised progressively towards the moon by activating its liquid motor. 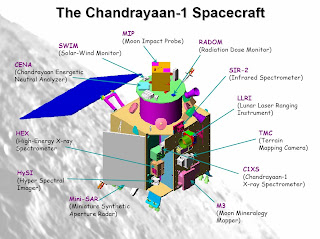 The tricolour landed on the Moon at 8.31 pm on 14th November, opening a new chapter in the history of India’s space exploration.The tricolour was painted on all sides of the 29 kg Moon Impact Probe (MIP) which was attached to the top portion of the main lunar orbiter, Chandrayaan. The MIP is the brainchild of former President A P J Abdul Kalam who witnessed its separation from the main orbiting craft and its crashlanding 32 km from the Shackleton crater on the moon’s south pole from the mission control room at ISRO’s telemetry, tracking and command network (ISTRAC) in Bangalore.

During its flight, its video camera took pictures of the Moon, the spectrometer began its analysis and the altitude meter did what is known as a ranging. While approaching the Moon, it slowed down slightly, then spun. While spinning, its three instruments went into action. When it was 5 km above the Moon’s surface, the altimeter did the ‘ranging of the Moon’. ‘‘All this while the atmosphere was pretty tense in the mission control room,’’ said a scientist.

Other entities which have reached the Moon are the US, former Soviet Union, Japan (albeit via a malfunction that sent its orbiter crashing onto the lunar surface) and the European Space Agency (17 nations). India becomes the fifth member of this club.
Posted by MADHUMITA at 9:33 AM

I like your blog very much. It is informative yet entertaining. Since the blog is in English, I hope that you will adhere to English conventions when quoting numbers. As a non-Hindi speaking person, I really do not understand when a number is quoted as 4,00,000. Does it mean four hundred thousand of four million, or something else.