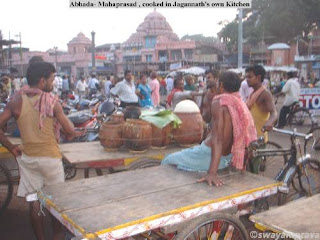 Jagannath Temple at Puri in India is said to have the largest kitchen in the world. This kitchen feeds thousands of devotees every day. The kitchen prepares food for 100,000 people on a festival day and for about 25,000 on a normal day.

Sri Jagannath is said to be the Lord of the Universe. His Kitchen is considered as the largest and the biggest Kitchen in the world. It is situated south-east direction of the outer compound of Srimandir. The length of the Kitchen is 150 feet, breadth is 100 feet and height is about 20 feet. It consists of 32 rooms with 250 earthen ovens within these. Around 600cooks(Suaras) and 400 assistants serve here everyday for preparing Lord's food. 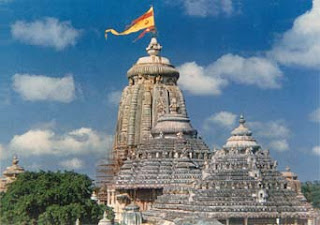 These are three types of hearths in the Kitchen of Srimandir such as Anna Chuli, Ahia Chuli and Pitha Chuli. The dimension of hearths where rice is prepared are 4' x 2.5' x 2'. The rectangular space created between two rice hearths is called Ahia. All types of Dal and Curry items are cooked in Ahia Chuli. There are only ten numbers of Pitha Chuli in the temple Kitchen which are made of cement. The fire of this Kitchen is Known as Vaishnava Agni, because it is the fire in the Kitchen of Lord Jagannath and used to serve Vishnu Himself. It is never put out.

It is believe that Mahalaxmi cooks in the Kitchen Herself; all are felt to be her servants. As she is not attentive to the cooking on the days when Lord Jagannath is said to be sick before Rath Yatra, the food is less tasty. During Rath Yatra when Lord Jagannath is in Sri Gundicha Temple. She is said to have no zeal to cook and so the food is tasteless. It is also said that if mother Laxmi is displeased with the preparations by the cooks, a dog will appear mysteriously on the temple grounds. If the dog is seen, all the food must be buried and prepared again. As no dog is allowed to enter the temple, this dog is said to be Kutama Chandi, a tantric goddess in change of purification of food.

The food in the temple Kitchen is prepared in such a pure way and with deep devotion; great spiritual impact is felt, both by those who cook and those who eat. The unique feature is that, clay pots are placed in a special earthen oven, five in numbers, one on the top of another. Yet the one on the top is cooked first.

There are two wells in the temple complex for the purpose of supplying water to the Kitchen. These are named as Ganga and Jamuna and both are near the kitchen itself. The radius of the well is more that 10 feet and depth is 100 feet each.

All the necessary commodities for the temple Kitchen are brought from Mahalaxmi Bhandar, which runs by Suara Nijoga Cooperative Society. The earthen pots used for cooking foods are provided by Kumbhakara and nearby areas supply these pots to the temple Kitchen. The required timber for the kitchen was previously supplied from different forests of the State. But after nationalisation of forests, these State Forest Corporation is providing timbers for cooking purpose.

According to Saroj Kumar Panda, Principal of Gadibrahma College, Delang, Puri, Daily 25,000 persons may be fed, but on big festival days, one to ten million may be accommodated. The temple Kitchen of Lord Jagannath is therefore considered to be the biggest hotel in the World, serving all without reservation or previous notice.
Posted by MADHUMITA at 10:05 PM

Jay Jay jagannath..........This is mahaprabhu's Lila and nothing else.

Jay Jagannath...
Proud to be here.