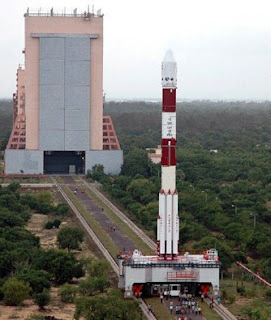 India's maiden lunar mission was launched successfully Wednesday at 6.22 am IST when the unmanned Chandrayan-1 spacecraft was placed in orbit by the Polar Launch Vehicle. All the different stages of the rockets performed flawlessly to place the spacecraft smmothly into orbit. With successful launch of Chandrayaan-I, India today became the sixth nation to send a moon mission. India joined the elite club of moon faring nations -- the US, Russia, European Space Agency, China and Japan.

Live Television pictures showed the PSLV-C11 blast off from Sriharikota off the coast of southern Andhra Pradesh state. About 18 minutes later, the 1,380 kilogram, or 3.042-pound, Chandrayaan-1, carrying 11 payloads, was placed into Earth's orbit amid loud cheers from Indian Space Research Organization scientists.

The Chandrayan objectives include finding water in the polar region of moon and Helium-3 gas, a replacement for fossil fuels. The mission will last about 30 months. The spacecraft is to reach its targeted lunar orbit at a height of about 62 miles from the surface after about two weeks, the Press Trust of India reported. 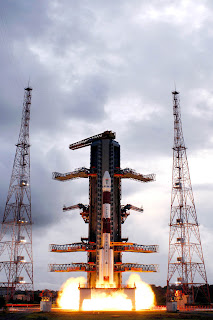 Another interesting objective of the Chandrayan-1 is the attempting to place the Indian flag on the moon's surface. If successful, it would make India just the fourth country in the world to have ever done so after Russia, America and Japan. The flag will fly all the 4,00,000 kilometers to the moon on Chandrayaan-1 and on command from Indian space scientists, it will hurtle down to the moon's surface. Called the Moon Impact Probe, this 35 kilogram computer monitor sized instrument was included on Chandryaan-1 at the proposal of former President APJ Abdul Kalam.

The 11 payloads include five from India, three from the European Space Agency, two from the United States and one from Bulgaria.The U.S. payload consists of lunar mapping instruments. The National Aeronautics and Space Administration said its Moon Mineralogy Mapper will assess mineral resources and its Miniature Synthetic Aperture Radar will map the lunar polar regions looking for ice deposits.