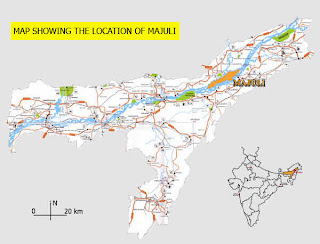 Majuli or Majoli is a river island in the Brahmaputra river, in the Indian state of Assam. Majuli is often erroneously cited as the largest river island in the world by the Indian media, but in fact it is merely the largest freshwater island in South Asia. All of the above the river, its tributaries, the wet lands and the chaporis along with the island of Majuli make it the largest mid river delta system in the world. It is a pollution free fresh water island. Total area of the island was 1250 sq.km., now it is about 577 sq.km., having lost significant area due to erosion. Its length from east to west is about 90 km. & width from north to south is avg. 16 km. Majuli is a natural & cultural heritage site. With water bodies covering most of the areas , Majuli attracts plenty of birds both local & migratory. The island was formed due to course changes by the river Brahmaputra and its tributaries, mainly the Lohit.

The island is about 200 kilometres east from the state’s largest city — Guwahati, and is accessible by ferries from the town of Jorhat. It is located 20 km. off Jorhat town. Majuli is a civil sub-division of Jorhat District.

Majoli is also the abode of the Assamese neo-Vaisnavite culture. About 25—26 Satras are remaining now in Majuli of which the Satras of Kamalabari, Auniati & Garmur are worth mentioning. These Satras are propagating the religious ideology of great Assamese medieval Vaisnavite Saint Sankardeva & Madhavdeva, preaching Satria culture.

Posted by MADHUMITA at 9:16 AM