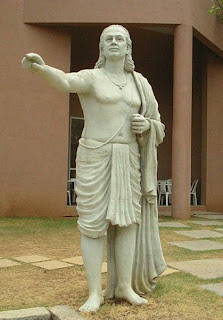 The study of mathematics had reached a lofty height in ancient India. Here is a small account of the contributions of ancient Indian mathematicians to the world.

The concept of 0 (zero) was introduced in India as early as the 3rd century B.C. It was passed on to the Arabian scholars and also to the Chinese in the 9th century A.D. European scholars grasped the inmportance of zero in the 10th century A.D.

The value of “pi” was first calculated by the Indian Mathematician Budhayana, and he explained the concept of what is known as the Pythagorean Theorem. He discovered this in the 6th century, which was long before the European mathematicians.

Algebra, trigonometry and calculus also orignated from India. Quadratic equations were introduced by Aryabhatta-I. Quadratic equations were also used by Sridhar Acharya in the 11th century. The largest numbers the Greeks and the Romans used were 106 whereas Hindus used numbers as big as 10*53 ( i.e 10 to the power of 53 ) with specific names as early as 5000 B.C. during the Vedic period. Even today, the largest used number is Tera: 10*12( 10 to the power of 12 ).
The earliest available writing on astrology is Jatakatilaka by Sridhar Acharya, a Jain who also authored a work on general science called Sastrakavita and was patronised by Western Chalukya King Somesvara I.

Aryabhatta (AD 476 – 550) was the first in the line of great mathematician-astronomers from the classical age of Indian mathematics and Indian astronomy. Aryabhata is the father of the Hindu-Arabic number system which has become universal today. His most famous works are the Aryabhatiya (AD 499 at age of 23 years) and Arya-Siddhanta.

Brahmagupta was an Indian mathematician and astronomer. Brahmagupta’s most famous work is his Brahmasphutasiddhanta. It is composed in elliptic verse, as was common practice in Indian mathematics, and consequently has a poetic ring to it. Brahmagupta had very important contributions in varied branches of mathematics as linear equations, quadratic equations, indeterminate equations, series theory, the number zero, Diophantine analysis, Pythagorean triples, Pell’s equation, geometry and trigonometry.

Posted by MADHUMITA at 9:14 AM

i felt greatby knowing about them thank you